skip to main | skip to sidebar

Ann, Sasha and the Alchemical Angels 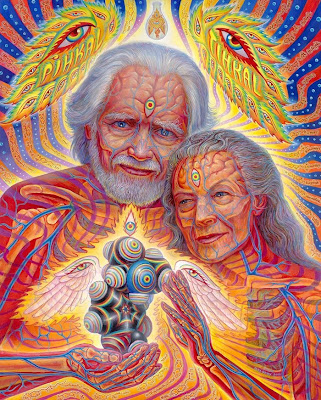 During the recent successful Psychedelic Science in the 21st Century conference organized by MAPS (Multidisciplinary Association for Psychedelic Studies), it was held a tribute dinner to Ann and Sasha Shulgin, during which the well-known visionary artist Alex Grey presented his new painting dedicated to the great psychedelic duo, The Shulgins and their Alchemical Angels.
Ann, Sasha and Alex have signed 50 limited-edition prints of the painting, some sold during the conference and some now available on the Maps webstore. Prices vary from $ 1500 to $ 3500, depending on the number (#1 sold at auction for $ 6600). Proceeds will be split between MAPS' MDMA/PTSD research with veterans of war and Alex and Allyson Grey's Chapel of Sacred Mirrors, with an honorarium given to the Shulgins. Almost half the prints have already been sold, so quickly visit the MAPS webstore if interested.
Posted by Skywalker at 08:56